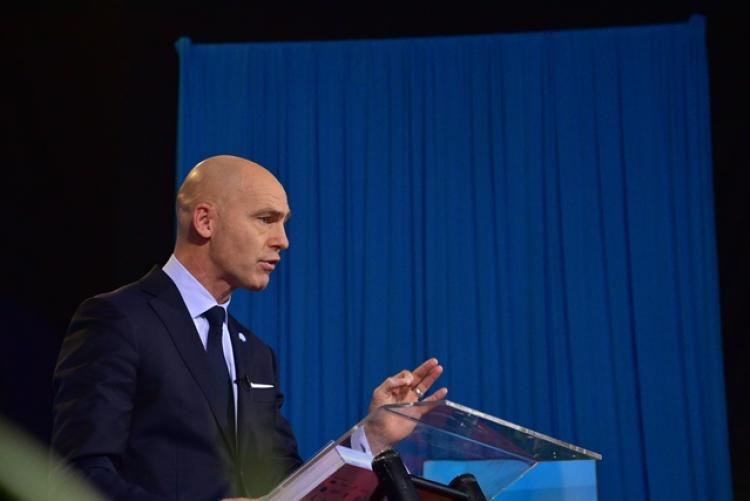 'Inaction against Climate Change is causing more deaths than acting. Africa won't need adapting as much as speeding up and scaling it up." This was amplified by the Global Center on  Adaption CEO, Prof. Dr. Patrick Verkooijen during the launch of the  State and Trends adaptation report 2021.

In his speech, President Kenyatta cautioned that in the absence of urgent climate change adaptation action, Africa's Gross Domestic Product (GDP) risks contracting by up to 30 percent by the year 2050.

"Evidence indicates that climate change will have a devastating socioeconomic impact across the world and quite severely in Africa. If we do not take any action Africa could, as a consequence, see its Gross Domestic Product (GDP) contract by up to 30 percent by 2050 due to climate change," the President said.

Consequently, the President rallied the global community to support the accelerated roll out of adaptation programmes in Africa so as to mitigate against the growing adverse effects of climate change as well as strengthen the continent's resilience.

“While it is relatively more difficult to design and implement adaptation projects and while fewer resources are currently available for adaptation, we should not lose sight of the fact that adaptation is, without doubt, smart economics,” he said. "To make this paradigm shift, we will lean on our institutions of higher learning. The University of Nairobi is one of the few African Universities, that offer graduate programmes in climate adaptation. It demonstrates the importance of Government of Kenya attaches to the issue of adaptation. I am hoping that this session, will open new opportunities to the University of Nairobi and the other forward learning institutions in our country"

Prof. Patrick Verkooijen, in his inaugural annual lecture as GCA CEO, said that Africa will suffer higher GDP losses than most other regions of the world. These impacts can only be reduced with adaptation.

“Thousands of lives and millions of livelihoods have already been sacrificed in Africa because we are far from delivering what is needed in adaptation today. For COP26 to succeed, Glasgow must deliver for Africa. To do so, it must bring more ambition and more finance to help Africa adapt to the pace of a climate emergency devastating the continent with increasingly serious consequences for the world’s poorest and most vulnerable,” he said.

Ban Ki-moon spoke in support of the African-led and African-owned Africa Adaptation Acceleration Programme, as a pathway to mobilizing the balance of the promised $100 billion in annual international climate finance. He highlighted AAAP as an important opportunity to realize a resilient and prosperous future for Africa. He noted that the climate emergency has Africa at the cross-roads. Business as usual is a sure-fire route to chaos. But adapt to it and Africa will thrive.

Prof. Kiama said that Renowned Scientists from the University of Nairobi will continue to work with other partners on Technology transfer and capacity building on adaptation.

“As a premier academic institution in this region, the University of Nairobi continues to play its rightful role in climate change and adaptation actions through research and training required to provide innovative solutions to the challenges that we face now, tomorrow, and in the long-term future. Lack of human capacity is a big challenge for our continent,” said Prof. Kiama. “The University of Nairobi is ready for partnerships to build human capacities, through programs, that are directly related to climate change and adaptation. We have established two premier research institutes – the Institute for Climate Change and Adaptation (ICCA) and the Wangari Maathai Institute for Peace and Environmental Studies (MWI-PES) that aim to generate scientific evidence related to challenges facing Kenya, East Africa and Africa in the long term with regard to climate change, adaptation, and environmental stewardship of Planet Earth.”

Dr. Akinwumi Adesina noted that AAAP provides a unique opportunity for wealthier nations to meet their commitments and help Africa tackle the consequences of climate change. She said, “I am optimistic that our partners will deliver the first round of financing of $6 billion to $8 billion that we need for the Africa Adaptation Acceleration Program in 2021.”

Patricia Espinosa spoke about the importance of finance for adaptation.

“Key to success in adaptation and resilience — like so many other issues related to climate change — is adequate finance. At COP26 we will continue to call for wider-ranging and comprehensive financial support for developing nations,” she revealed. “The $100 billion pledge was a commitment that was made in the UNFCCC process more than 10 years ago. It’s time to deliver.”

Kristalina Georgieva noted that the effects of climate change in Africa threaten lives, jobs, and the substantial economic and development progress of the past two decades.

“As the GCA State and Trends in Adaptation report rightly says, adaptation is a necessity and must go hand-in-hand with reducing poverty and improving livelihoods,” she said. “African countries need to do their part and have created the Africa Adaptation Acceleration Program but cannot do it alone. Along with bold action to reduce emissions at COP26, the international community must deliver on its commitment to provide at least $100 billion a year in climate finance for developing countries where financial flows for adaptation must be on a par with financial flows for mitigation. This is essential for securing a sustainable global recovery.”

Ngozi Okongo-Iweala said that to ensure that supply chains are resilient can be a key component of Africa’s adaptation strategies. This will require significant efforts to climate-proof key trade-related infrastructure. Initiatives like the WTO’s Aid for Trade can help mobilize investment in climate-resilient infrastructure.

The report outlines the financial and macro-economic risk climate change poses to Africa and the imperative for the continent to scale up adaptation to reduce the economic costs of climate change. Without adaptation action, projections estimate that climate change will lead to an equivalent of 2 percent to 4 percent annual loss in GDP in the continent by 2040, with the poor, women, and excluded populations bearing the brunt of the impact. Yet the GCA report shows that the benefits of adaptation measures are frequently more than twice or as much as five times or greater than their costs. In addition, moving quickly to adapt is especially beneficial, with a benefit-cost ratio for early action of at least 12 to 1.

The blueprint for adaptation actions for the African continent set out in the GCA report “State and Trends in Adaptation in Africa Report 2021” is vitally important. We must ensure that trade policies play a key role to play in delivering affordable and accessible climate adaptation solutions to Africa.